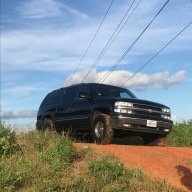 Hello Everyone. I’m new to the site but I’ve been looking for ideas for my 2001 Suburban 2500. Some of these ideas haven’t been done (or I haven’t been able to find someone else that’s done such mods online). First and foremost. The 8.1L engine needed to breathe a little bit more. I started with a full 3” cat delete into a factory-style 3” Y-Pipe from a 1500HD (6.0L), then into just a turndown for now. I’ve ordered a shorty 3” resonator to cut down on the classic Big Block straight-pipe blatt and nastiness, and with a 3-1/2” factory exit Duramax tailpipe, she will breathe like she needs, and sound like I need. I then did the “Swiss cheese” mod on the lower portion of the air-box, which just consisted of about 10 1/2” holes, with a K&N panel filter. The 8.1L has a problem with oil consumption (not really a PCV system). There’s a small tube on the belly of the intake that lays in the valley and can suck oil. And does. GM put out recalls and TSB’s for intake gaskets and new intake bolts, but the true problem is the tube/nonexistent PCV valve. I started by simply venting my oil cap, to allow pressure to go through and out the neck instead of pushing oil into the intake (not really sure if it’s helping because consumption is about the same [1qt per 2,500mi.]) The true fix is to pull the intake, cut the tube off, weld it closed, and tap a valve cover for a Pcv valve. However the truck is my daily, and I can deal with adding a quart between oil changes until I find a cheap factory intake for cheap to test my aluminum welding skills. To get the breather I need on my valve cover, I want to get some ”496 STROKER” Chevy Orange tall covers to clear the future roller rocker swap, but what about the coils? A Holley LS engine Coil Relocation kit (P/N 561-129) will clean it all up. My next future mod would be to get Crane’s 7/16” Rocker Stud Conversion kit for the 8.1L (P/N 99155-16) which allows you to use traditional 7/16” BBC roller rockers (factory are non roller). This stud kit simply screws right into the heads without any machining, or removal of the heads. Just unscrew the old studs, clean the threads, and thread in the new studs. Factory 3/8” 8.1L pushrods will suffice, as will valve springs with a stock cam/rotating assembly. As far as engine, I do not plan to go further with mods other than the normal factory 8.1L intake manifold mods and possibly in the future, plus a tune from Blackbear Performance.

With engine and exhaust out of the way, I come to suspension/ wheel and tire setup. I bought the truck a little over a year ago (09/2018 w/ 109k). The previous owner (also original owner), put Goodyear DuraTrac 285/75R16’s on it, and with the stock Alloys, I couldn’t be happier with a factory wheel. But 285’s are still not beefy enough for her, and 305/70s WILL fit the 6.5” wide rims as long as you air them down slightly to accommodate for ballooning (I run around 54psi all the way around in my 285’s when not towing and they wear perfectly even. When towing I air up “by ear” as needed. Soon I’ll order some leveling torsion-keys and shock extenders (I am not TOUCHING the Autoride system unless something goes bad on it). The keys will level the truck out and the 305’s will clear no problem and look good doing it. GM designers had the bright idea to widen the IFS on their 4X4 trucks and SUV’s, with reason being, you didn’t want your rear tires following the exact same path as the front. However, we all know, if you wanna catch any eyes at all, you can’t be skinny in the rear

. 1-1/4” spacers in the rear will bring the rear trackwidth, even with the front.

My next level of changes would be on the rear side vent cover appliqués. I hate them, lol. The ugly GM faded black plastic is awful, and Escalade’s the same years, used color matched appliqués that look much more streamline and really tie in the end of the truck. I plan to find a wrecked black Escalade somewhere soon to pull the appliqués off without having to repaint them. However, it seems like 99% of Escalades from 02-06 were Pearl white, or a Maroon color. So I may be searching for a while. I then would like to add some 6X1-1/2” LED light bars along the underside of my rear bumper, wired as additional reverse lights because the factory ones are disappointing.

On the front end, I’ve installed 6000K LED High and Low bulbs, done the 4HI mod, and DRL delete. My park/turn housings are “euro” eBay specials with all clear lenses, and the Sylvania 3157 amber bulbs look great with the whole housing flashing as my turn signal. But as I posted in another thread. I may go even further with the lighting mods, by adding a bulb into the unused area of the factory headlight housings (beside the low-beam portion).

Another easy fix, being that this is a black truck and I will definitely have some tire stick-out, I’d like to protect the paint on my rockers without bed-lining them, or having to use mudflaps. DupliColor makes a textured peel off rocker coating (P/N RGA100[white] / RGA101[black]) that will go on over the factory finish, protect it from rock-chips and the occasional dirt blasting while fishtailing down dirt roads, without damaging it whatsoever. And if I ever want to put a new, or even a thicker coating on, I just peel it off and respray.

Well I know this thread is probably longer than some complete categories on this forum, but I wanted to put out some of these mods because they’re not common, but they are classy. They fix things that your eye doesn’t really catch because you’ve seen it millions of times going down the road before. The things that you can slightly tweak for all the difference. For example, the extensive headlight mods, the leveling, the vent covers, etc. These are all things that will make the truck look ALOT better, but people won’t be able to look at it and see things that match any other truck. Not all of the mods are original, but some of these I’ve actually looked into to make happen. Not a lot of people know about some of these mods, so feel free to let me know if anyone would want me to add something on how to do some of these mods on these trucks, such as the DRL delete which is uncommon, and the 3rd bulb mod which I don’t think has ever been done on factory housings. So feel free to ask questions, comments, ideas, opinions. I’m open to all. Thanks. 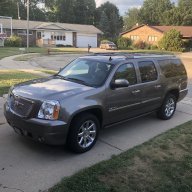 Welcome to the forum from Iowa. I’m sure you will get feedback from some folks that are pretty knowledgable about your situation. 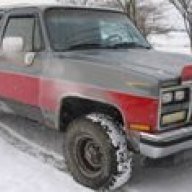 Bull in the china shop

Lol--more in remembrance then anything else

Bull in the china shop

Tonyrodz said:
Lol--more in remembrance then anything else
Click to expand...

Honestly, I’m in East Texas, and every single person with a lowered single/ext. cab or lowered Tahoes, EVERYONE wants or has an HD hood swap. And being that this truck “technically” is an HD, I think just the hood swap would look good, but keep the factory “1/2 ton” bumper/grille. I love the look because it’s different but not so different it looks bad, or stock. My whole plan for the truck is subtle, different from stock, but looks like it came that way from the factory. Only real reason I haven’t gotten an HD hood yet is because I really don’t want to have to paint it (the black would be rough to match perfectly) and I can’t find a black one in any kind of good shape at all. I found one on marketplace for $300 and it was in Houston (~4hrs or so) and it looked like someone had just unleashed a whole can of aircraft remover on it. I am keeping my eye out though for a wrecked black HD truck. Thanks.
Last edited: Nov 29, 2019

Here are the rear vent covers I was talking about. This person swapped the Escalade rear glass and 3RD brake light, I’ll keep my original glass and 3RD, just swap the vents over. (@czargee)

You must be logged in to see this image or video!

jlj1267 said:
Here are the rear vent covers I was talking about. This person swapped the Escalade rear glass and 3RD brake light, I’ll keep my original glass and 3RD, just swap the vents over. (@czargee)

Looks sick man! My rack is off right now because the paint was flaking pretty bad, but once I get it repainted and restore the plastic parts with Coverall, I’m just gonna use the long side rails with no crossbars. With my Suburban, the sleek look on the roof kind of makes it look naked or bald. But I won’t use the horizontal crossbars because I don’t use the rack anyway.
You must be logged in to see this image or video!
You must log in or register to reply here.