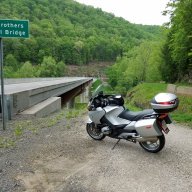 Much less drama on the rear. I jacked up the rear and settled it onto jack stands. Looking at it I realized I could change the shocks and springs without even taking the back tires off. I slid under and released the air lines, then squeezed and pushed and pulled to get the wires off the first side. With a crack it came off. Looking at the shock there are two little pins sticking out of it. Uh oh. Looks like the pins in the harness plug were corroded and stuck in the shock. That's gonna suck. With that one off I could now see which of 492 varieties of electrical connector releases it was and the second one came off easily. Wait. Looking back at the first one there was a plastic piece from the shock stuck in the connector. Pulling the release I pulled that out and all was well. Ah.

With my giant heavy battery powered impact gun I easily blew the bottom nut off but the bolt wouldn't come out. Oh, the shock is limiting movement of the axle. I slipped a small jack under the axle and lifted pressure off the bolt which slid right out. Getting to the top bolt however things got more complicated. I pulled the fender liner out and could sort of get to the bolt. I put the impact onto it and blew the nut loose. Well I would have except the bolt spun. I slid under the truck and managed to get an extension and socket onto the bolt so I could hold it only now I can't get to the impact to blow the nut off. I left the ratchet in place and slid back out. Now I can put the impact on the nut and with some effort I got a hold of part of the ratchet. That took care of it. Then I pushed the bolt back whereupon it fell neatly into a carefully engineered pocket built into the truck to steal that bolt. Several failed efforts later I got my bolt out. I used the spring compressor to change the spring to the new one then pushed the new shock up and promptly dropped the bolt back into that pocket. I used the last functioning method to raise the bolt up and guide it into place. The rest of the connections went smoothly and the liner was replaced. Next side.

Remembering that it wasn't as easy as I thought I pulled the left rear wheel. Something swinging there caught my eye. Hm. Part of my ride height sensor dangling by its little rod.
You must be logged in to see this image or video!
I pulled out the fender liner easily (getting good at that too) and took the remainder of the sensor out. No time to get a new one right now so I looked at it and figured out how to hold it together with a couple of washers and a small screw. I quickly wadded up a paper towel and shoved it into that secret pocket. I supported the axle and blew the bottom bolt out, then I figured out how to use a deep well 1/2" drive socket on a ratchet and reached it around onto that bolt at the top comfortable in the knowledge that I wasn't going to drop anything into that pocket. That went well as did changing the spring and reassembling everything including a(nother) new compressor.

When I lowered it down off the jack stands I noticed it sat higher. MUCH higher. I twisted the ignition key to on and waited for the compressor to cycle and put some air into the shocks. It cycled but didn't get any noticeable change in the air shocks so I turned the key off and back on to cycle the compressor again. Still not enough. Third time's the charm only it wasn't. I decided that broken sensor was going to be the problem. I bit the bullet and ordered one through O'Reilly. I drove it around two days then slapped the new sensor in and still the rear sits a LOT higher. Maybe that's the height it's supposed to be. Time to get the new front springs.

Now I need to replace the left front hub because the bearing is shot.
You must log in or register to reply here.