I have a 2002 Chevy Tahoe that I purchased with a functioning LT autoride system. The previous owner had swapped out the rear shocks with Monroe Max Air shocks and cheaply attached resistors to bypass DIC. Eventually, the rear shocks began leaking, causing the compressor to run continuously and eventually burn out. After a couple of years of not working, I replaced the compressor, but I am running into the following issues.

Issues: When I start the vehicle, the system will attempt to run through the check cycle of the auto ride system, but it will just click at the pump and nothing else. So far, I have attempted/noted the following:

1st: I bench tested the compressor, and it turns on, pumping out air.
2nd: I checked all fuses with a multimeter, and they test fine.
3rd: I tested relay and it clicks when power is applied.
4th: Both resistors on back shocks are corroded and falling apart that have been wired in to shut off the DIC message.

I do have a ICARSOFT Diagnostic Tool and receive the following codes:
0585 Left Rear Actuator Circuit
0630 Right Rear Position Sensor

Also, both of the rear shocks are blown.

My question is where should I begin? I want the rear leveling function to operate correctly for towing purposes, but I am unable to get the compressor to kick on after I start up the vehicle. Again, it just clicks and nothing more. Every 20 seconds or so it will continue to click as if it recognizes that it needs to fill, but nothing. If it were to start running than I would just buy new shocks and put them on, but I don't want to do that and there also be an issue with the ESC module possibly. Frustrated! 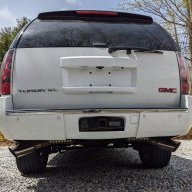 My recommendation is to remove the fuse activating the compressor, and leave it unpowered, until you replace both blown shocks. Then, with a new compressor and new shocks, and the removal of the resistors, you can start troubleshooting, if the issue still exists.
OP
OP
R

Thanks for the recommendation. Just removed the fuse and will be replacing the shocks soon.
OP
OP
R

Replaced the shocks with new air shocks and put the 30 amp RTD fuse back in. The DIC message turned off and has not returned, but the compressor still clicks without filling the shocks. I popped off the rear driver side height sensor arm and manually adjusted it, but no change and the compressor did not kick on.

What would be the first step in troubleshooting?
You must log in or register to reply here.

C
yet another autoride issue.

2007 GMC Yukon Denali 6.2L v8 - planning to convert back to stock z55 / autoride all around - assistance/advice/input would be v appreciated