RENAMED!! The adventures of Chase and his 2006 Yukon XL Denali!! Follow along on my travels! 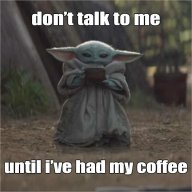 Tonyrodz said:
Really thoughtful of them youngins.
Click to expand...

It never ceases to amaze me what an influence a parent has on a child. That can go either way....
OP
OP

Thanksgiving day yesterday was very nice. Bro in law had to work a 24 hour from Wednesday morning to Thursday morning, but he was home by 9am thanksgiving day and that was awesome. He’s a career firefighter. Did I think 12 years with corona fire back in socal, and he landed a good position with Franklin fire here in Tennessee.

Another couple about my sisters age that were super close with them back in California decided to move out here with them at the same time. They spent the holiday with us with their two youngest kids, a one year old daughter, and a two year old daughter, whom my sisters kids love to hang out with. That was nice to have them here for the day as well as they’re super sweet people. He’s an emergency room nurse now working in Franklin and he had to leave about 5pm to head into work.

Took some wonderful family photos of course. My great aunt, my Grammy’s(who’s no longer with us) youngest sister which is probably the relative I’m closest with from my extended family now, flew down from Springfield Vermont. She visited my mom and I in the spring and it’s been a real treat getting to see her twice this year! That’s my mamma in the first photo. And then in the third photo, my Aunt Sally is on the far left, my bro in laws Aunt Patty is on the far right, mom and I on the right, and then my sister Kierra, bro in law Bobby, and then my nephew Jeremy, and my nieces Capri and Heidi-Rae in the middle. Funny enough the greet aunts being here, both are our grandmothers sisters. Aunt Sally was my Grammy’s youngest sister, and Aunt Patty is Bobby’s grandma’s youngest sister.

Tonyrodz said:
It never ceases to amaze me what an influence a parent has on a child. That can go either way....
Click to expand...

Also thankful that my sister in bro in law are good people and good influences on their kids lol.
OP
OP

It’s been a busy few days. Friday we drove out to my bro in laws parents property in Tullahoma, about an hour from my sisters place in Culleoka. They’ve had that property several years before my sister moved but now his dad is building a house on it, so we got to check it out. They just headed out today as they have business in California to handle for a bit. Went out to drop off bro in laws Aunt Patty off so she could see them for a couple days. Bro in law bought his 2001 rear wheel drive sierra SLE regular cab from his aunt Patty when her husband passed unexpectedly in November of 21. Truck is in pretty damn good shape and only has I think 105k on the odometer. That’s in the first pic. When he was asked if he wanted to buy it, he called and asked my opinion and I said “absolutely! Buy it and don’t let it go!” He’s a hard core yota guy though and has had many forerunners over the years. He totaled his 1997 I think about two years ago. I was able facilitate them buying a 98 forerunner from one of my long time big bear clients in November of 21 right before they moved to Tennessee and he loves the thing and was stoked that I was able to help him with it. It’s here as well and then my sister has had a 2014 sienna SE for quite a few years. We’ve been in and out of that a lot the last few days. On the way out of Tullahoma we took. Short detour into Lynchburg. We were a tad bit too late for a tour at the JD distillery but got to walk around for a few minutes and took photos in front of the barrel tree. That was fun.

Sister needed to drive into Nashville yesterday to pick up bourbon that my bro in law and his marine corps platoon buddies got to go make at a bourbon place near downtown, a few weeks back on their weekend that they do every year to celebrate the marine corps birthday. So sister took us to 1819 coffee co. On the way into Nashville. Which I got to see last time I was here. Really cool sorry behind it. The history behind it is that the family that owned the farm it sat on made it the last stop on the Underground Railroad for slaves escaping to the north during the civil war. Sometime later after it was no longer in the family’s hands it turned into, I think the towns school building and then it was also a small church at some point. Eventually the city of Thompson station owned it as a historical building and decided they no longer wanted to keep it and keep paying for the upkeep. They put the property up for sale and a small church of like 200 members out in Nashville raised the million dollars to buy the property in like 5 days, bought and paid for the property in cash, and they turned into a coffee shop. But it has a purpose. They read of a soldier fighting in the Vietnam war that was so lonely while deployed that he would just wander through whatever place he was stationed on, sit on a bench somewhere and start talking to anyone around him. I forget the rest of the story and somehow he made a stone bench in Vietnam or something and said bench is here at the coffee shop. Now the actual historical house still stands at the property and they built a large garage type facility off the backside and that’s what serves as the coffee shop. The coffee is amazing and every room on the ground floor of the house is setup to be a common area. Whether you come in to get coffee or not, people are encouraged to sit and chat, or sit and do work, or just be there and be in community with anyone and everyone. Each room has big comfy chairs and several have large fireplaces with beautiful mantles. There’s beautiful paintings all over by a local artist and a prayer wall right as you walk in the front door, where you can leave a tag with a prayer and can also take a tag already on the wall and pray for whatever the person wrote on the tag. The church also built a huge barn, and they host weddings and events. But one Sunday a month the church also has their church service in the barn, and the worship team sits square in the middle and all the chairs are setup in a huge circle around the band area and that’s how they have worship and their sermon. I’d have loved to have been able to attend that church service but unfortunately this morning was not the one Sunday of the month it happens lol.

We then headed into Nashville via the back roads. Got to see the actual Thompson station. Pretty cool and beautiful horse country neighborhoods were along the way.

Wandered around downtown Nashville for a couple hours. Lots to see. Aunt Sally had to take a pic with Elvis lol. Didn’t even realized that we’d be walking right passed the Ryman…. That was cool too. Saw Santa roll in on a Harley while I was waiting for a dairy free pizza order at the mellow mushroom bar. I was so irritated all afternoon cuz the food plaza at the mall was ridiculously irritating. And then walking by the bar I saw pizza, and had been craving it all day and decided to stop in and ask, and surprisingly had dairy free cheese and it made my day. Lol. But Santa on a Harley was pretty damn cool too.

Had another family get together day today after church. Bro in laws parents dropped by to drop Aunt Patty back off with us, and have a Sunday football get together before they got on the road for California tomorrow. I guess he has a cousin or distant relative that lives 15 minutes from my sister in Lewisburg. Said relative joined us today and showed up in a 2005 Escalade ESV platinum edition and of course I had to talk him up about it. Apparently had like 270k on it but he loves it just as much as we all love our rigs lol. That was fun.

Bro in law is a total gun nut(served in the marine corps…. Go figure….) and was out this afternoon shooting behind the garage with my nephew Jeremy and a buddy that was also here for the day with his wife and kids. I think the buddy was having an issue with his gun and wanted my bro in laws help figuring out which part was faulty My nephew desperately wanted me come hang out and shoot, so picked up a .22 rifle and also two pistols. Have only shot a gun once in my life, and it was like 15 years ago when I was in high school visiting my family. Needless to say THAT was not a fun experience and I haven’t shot since. Not really because of that but because I didn’t make it a priority. I’ve been thinking the last two years buying a gun simply for ease of mind on my longer travels but haven’t had time to go to a range and try out some to see what I want. But the quick little session was fun. My nephew is just as much of a gun nut as my bro in law. But he’s super responsible. Zero gun related injuries to date with any of the kids. I did not like the kick of the first pistol. But the .22 rifle was fun and the .22 pistol I shot was easy and fun to shoot as well. #MERICA! Lol