So, either my search skills vaporized, I'm using it wrong, or I'm super picky.

But the cargo cover is terrible. You can't use it behind the third row and if you leave it installed, you can't raise or lower the third row seats... This is not rocket science... is it?
G

The GM cargo cover is terrible, it really scratches the plastic on the sides around the area where you extend it as well. When shopping for my Yukon the cargo cover description said it could be deployed behind the second or third rows, but I didn't find out until after delivery that that is only for the XL model, with the regular wheelbase it can only be mounted behind the 2nd row and even then leaves a huge gap between the second row and the cover mourning points. I don't use my third row at all and I have the second row bench so the gap is less of a problem when it's reclined fully (although not comfortable to sit in reclined as far back as possible I rarely have passengers), but it would be nice to have the option to deploy the third row without taking the cargo cover out of the vehicle and storing it somewhere ie if I'm on the road and want to pick up some friends and use the third row, not always possible to just leave it in your garage or somewhere safe. If I had known I would have ordered the XL, in fact I've already ordered a 2023 XL to replace my 2022 standard wheelbase that arrived at the end of February and that is partly the reason. This is my first American SUV previously only had Euro ones where the cargo covers are well designed, sturdy, easily storable, and provide full coverage, this GM one feels like an afterthought especially because it's an optional purchase and doesn't come with the vehicle. 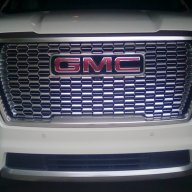 Hadn't thought about the cover for use in the SWB models. The attachment is bargain basement for sure, but works ok in the XL, unlike the attachment points for the coat hangars. GM couldn't have found worse places to put them.

I like the cargo cover in the XL, works well.
OP
OP
D

XL loses 200# tow capacity, but more importantly is too long for my garage. Seems pretty easy to adjust the design, I bet someone forgot and it got too late to change. Classic GM. Can't be perfect...
You must log in or register to reply here.